Learning Inside a Loony Bin... 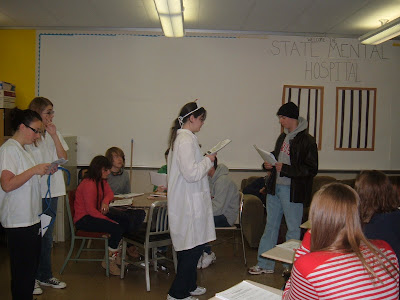 I'm in the middle of teaching my favorite unit of the year: the play version of One Flew Over the Cuckoo's Nest. It is a hilarious and very touching play, and the students love it because it's set in a mental hospital so the characters are...well...a little loony. The main character is also quite crude, which of course goes over extremely well with high schoolers. For the unit, I actually turn the classroom into the mental hosptial, and I make the students audition for the lead roles. Surprisingly, they get really into it, and all of their classmates vote and "cast" the play. Then, as we read it, I direct them, and they act it out--costumes and all. The students love it because they are moving around, acting like lunatics and saying hysterical things. It's especially good for my special education students because it's hands-on learning. One of my male students who has a reading disability and is usually very quiet asked me if he could play a part that would "make the class laugh." I cast him as Mr. Scanlon, the mental patient who thinks he's building a bomb to "blow up the whole stinkin' world." Whenever he says a line and his peers chuckle, he beams from ear to ear. I love it.
To make matters even cooler, last year I suggested that the school put on the play as the fall drama--and they decided to do it. So, this weekend, all of my students will be attending the play. They are really excited to see what we've been studying in class performed live, and I think it will be a great review and reinforcement. (It's their "final project" for the unit; I told them they could either see the play or write a paper...surprise of all surprises, they all chose to buy a ticket to the play.)
The play is Thursday, Friday, and Saturday at 7:30 p.m. at Orchard Park High School. If anyone is interested in going, let me know. I will probably be there all three nights, and I think Ryan and some friends are going to join me on Friday night, It really is a great show.
These are some photos from my make-shift class production; I'm sure the school's production will be much more professional, but we sure have a lot of fun acting in room 322! (As you can see...) 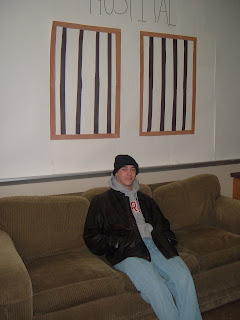 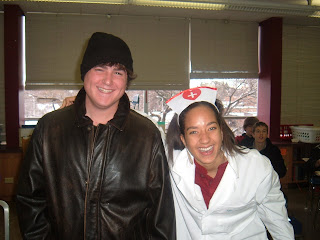 In the real show, I don't think McMurphy and Nurse Ratched would be this excited to see each other... :) 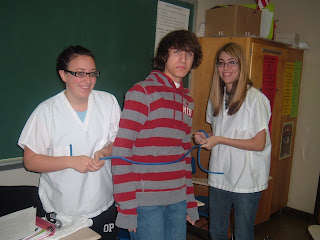 The Aides tie up one of the patients 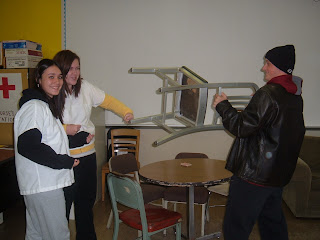 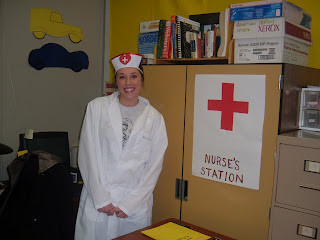 Nurse Ratched may look sweet...but don't be fooled! (The student is actually very sweet, but she sure plays a vicious Nurse Ratched...it's awesome.) 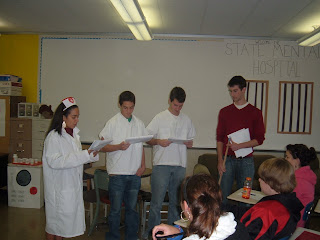 Kevin (who is 6'5") plays Chief Bromden--the giant Indian who pretends to be deaf and mute until McMurphy comes along and befriends him.

P.S. Thanks to the friends who loaned me scrubs, labcoats, and a leather jacket to spice up this production!
Posted by Rachel at 5:54 PM