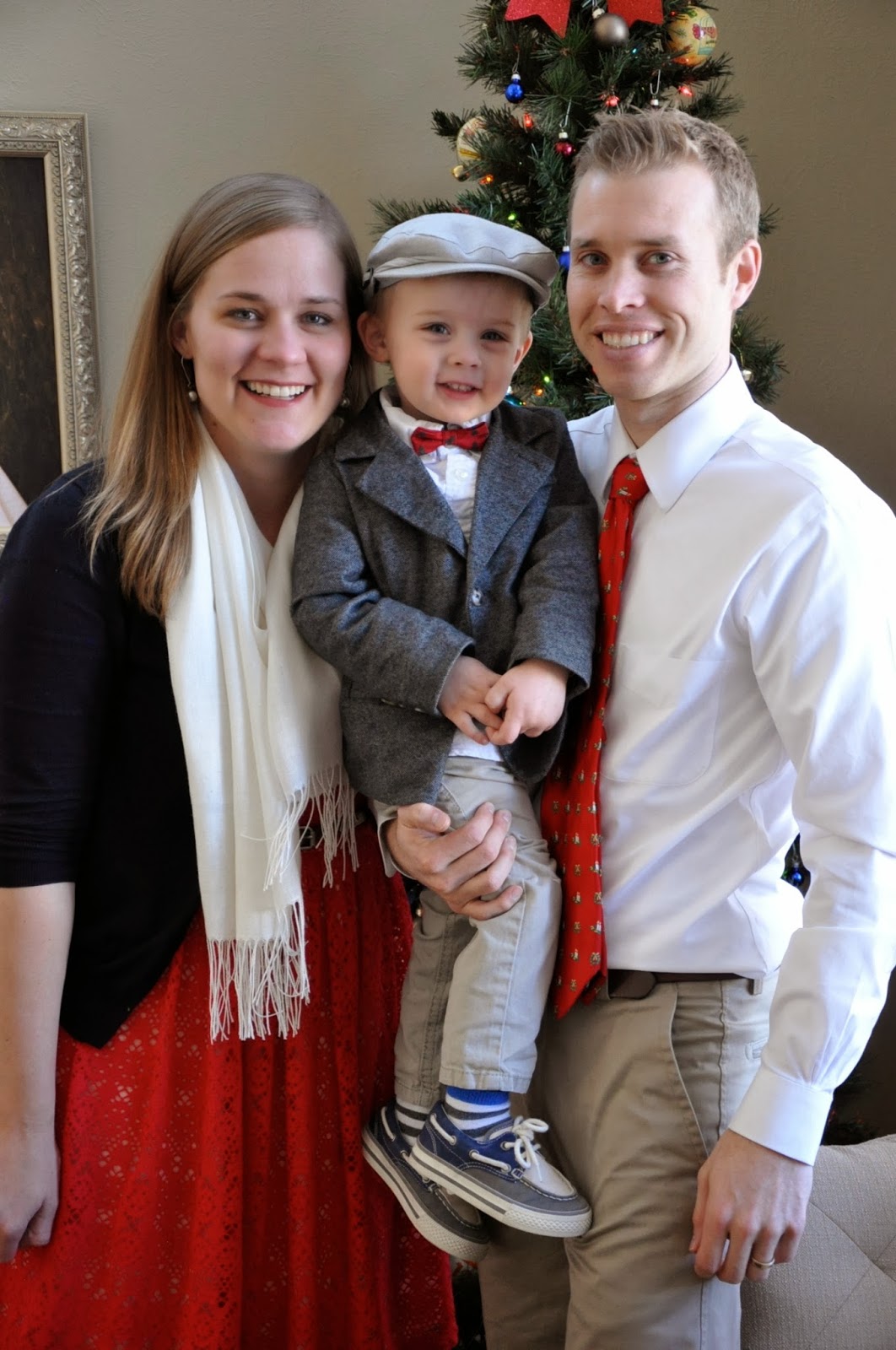 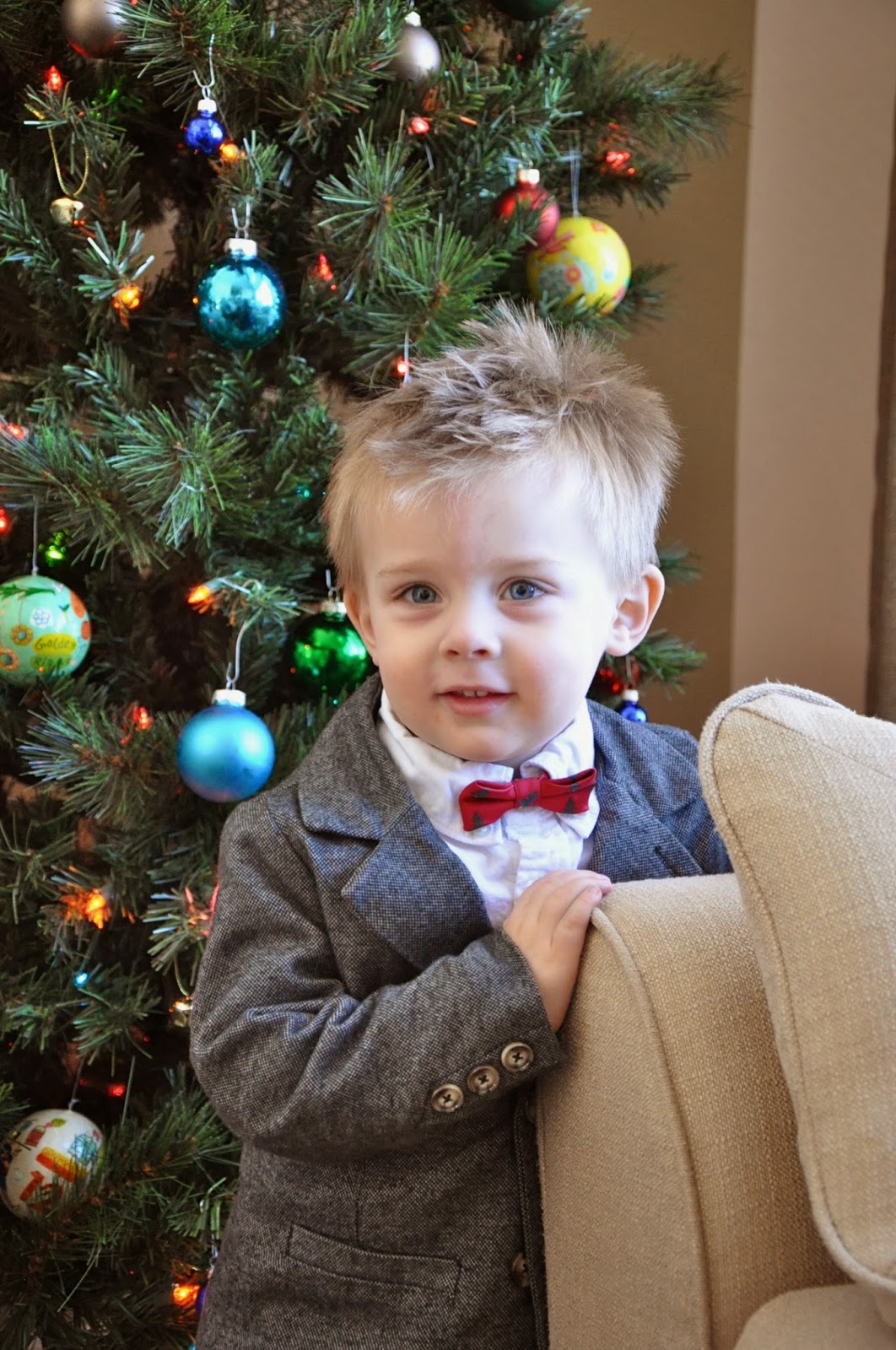 We had a great Christmas in Denver with my family this year.

A highlight was seeing Noah play with his cousins.  We lived in Denver from the time Noah was a newborn until he was about 20 months old.  For most of that time, Noah was too little to really play well with his cousin Callum, who is 2.5 years older than he.  Oh Noah would certainly try to interact with Cal--but that mostly consisted of Noah following him around, slobbering on his toys, getting in his way, knocking over his creations, and making Callum cry out of frustration.  By the end of our time in Denver, Noah and Callum were just starting to play together really well, and it was so sad to leave! 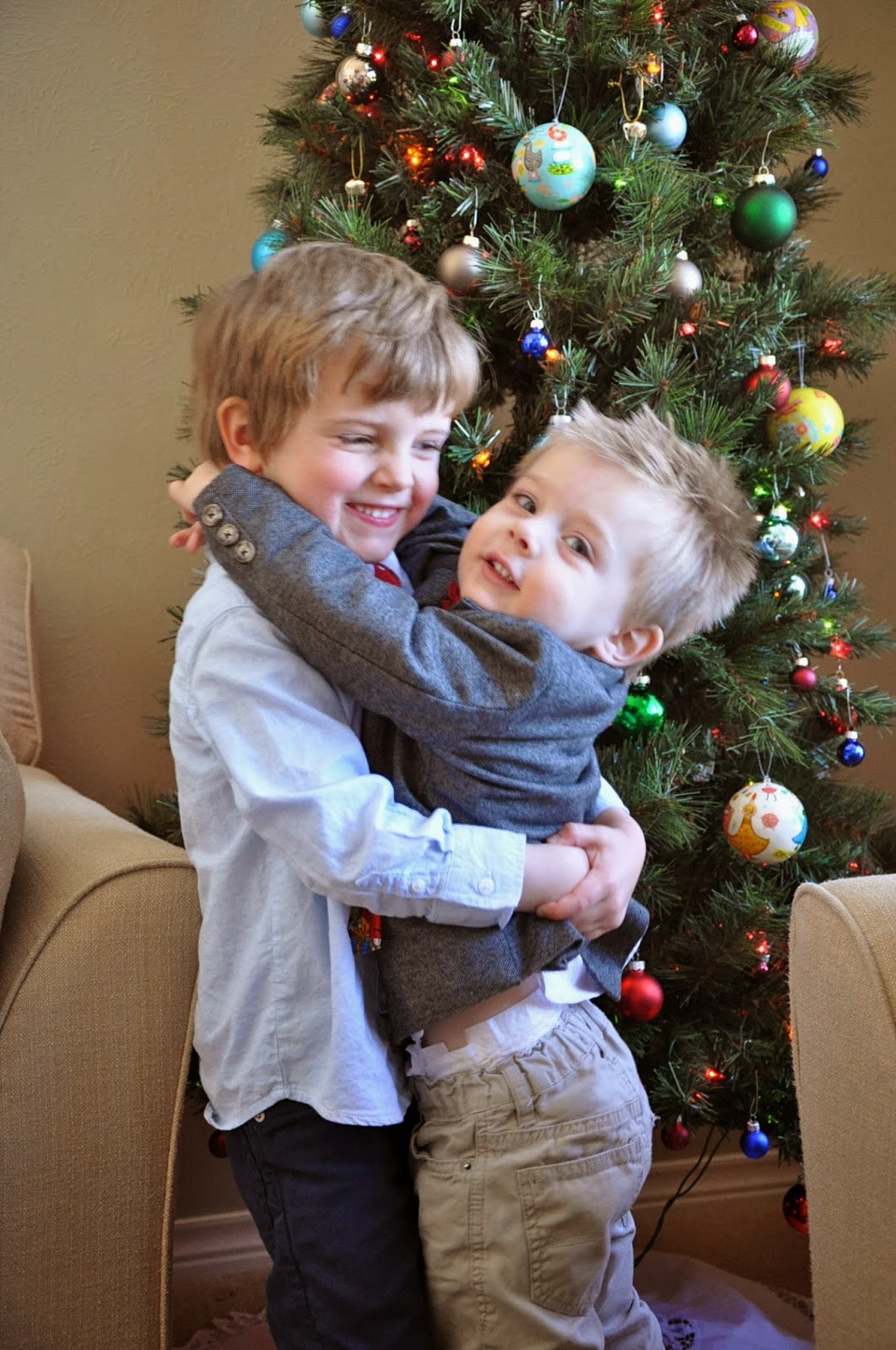 This trip, they played together like a dream.  They would spend hours playing cars and trains and giggling together.  I don't think a single fight broke out.  It made me so happy to see them together...and also so sad that we don't still live closer!  Even little Jade, who is eight months younger than Noah, got in on the action and played with the boys.  (Give her six more months and she will be right in the thick of everything with them.)  When we were on the road back to Idaho from the Salt Lake Airport, Noah started crying and saying, "I want to go back to Callum's house!  PLEASE, turn this car around!"  So cute but also so sad.  He cried for Callum on and off for days and still often asks for him. 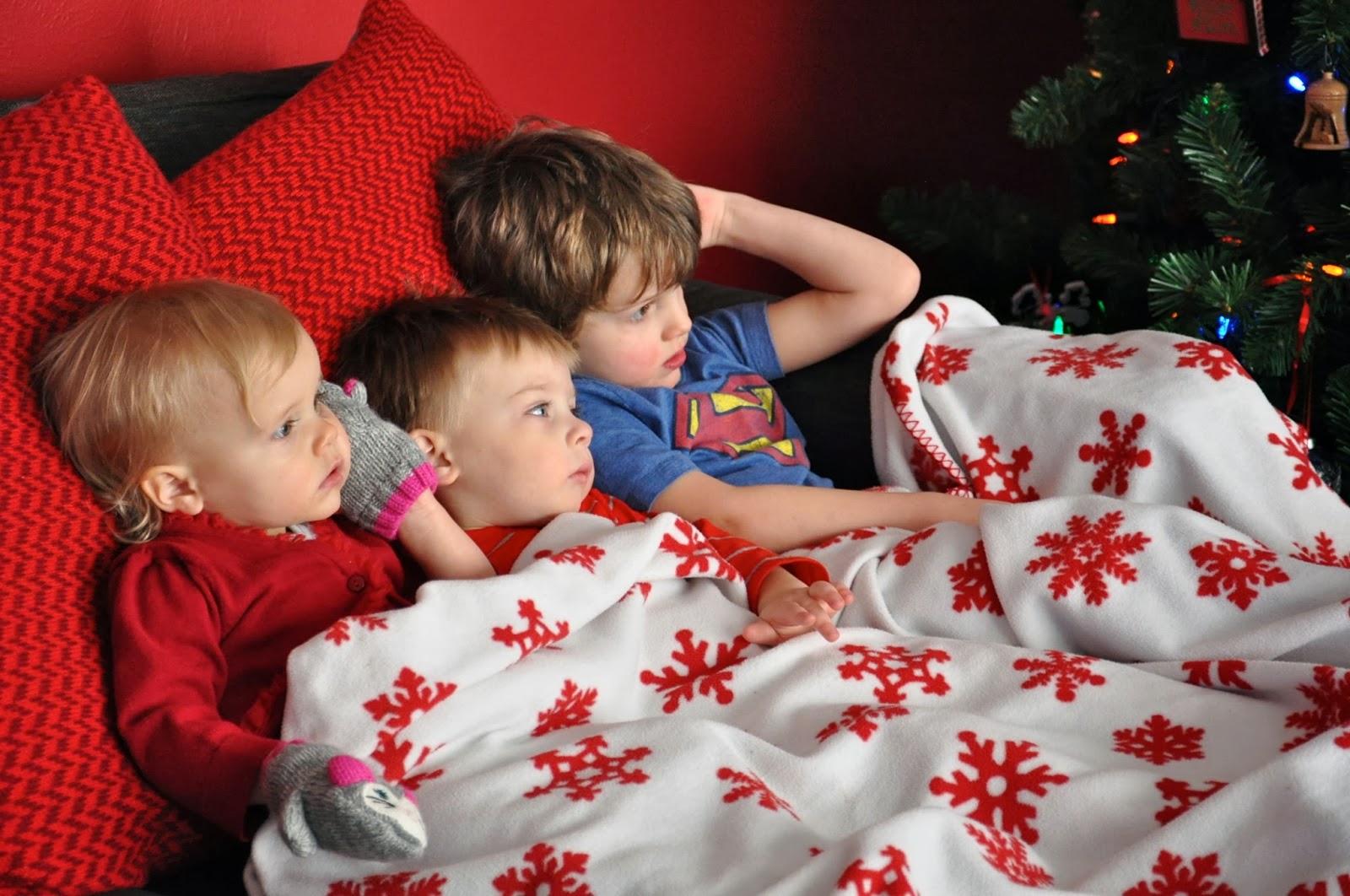 Speaking of my sister's kids, Ryan developed a real crush on little Jade this trip.  Can you blame him?  She is to-die-for cute with her little blonde pig-tails and spunky personality. 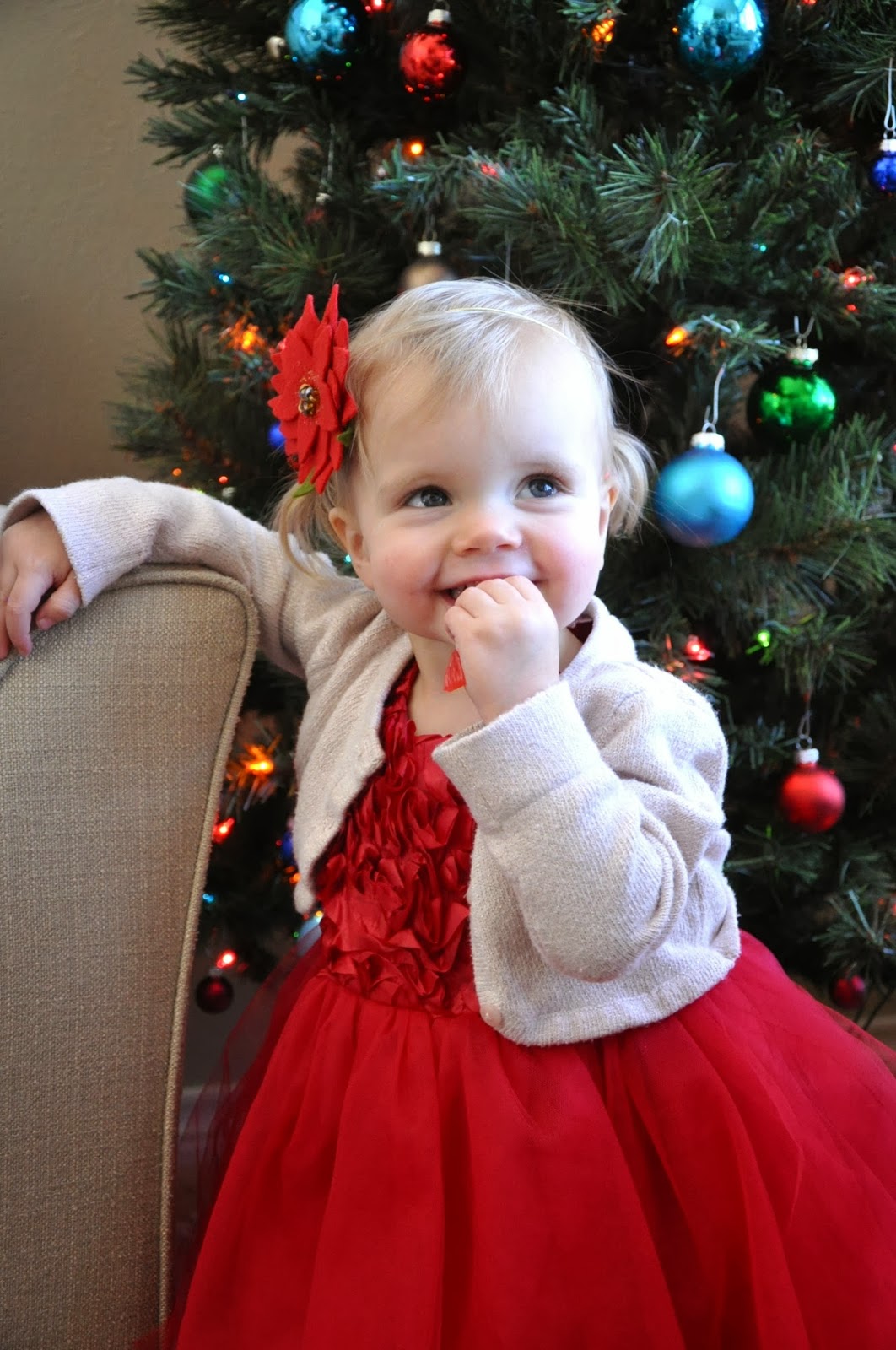 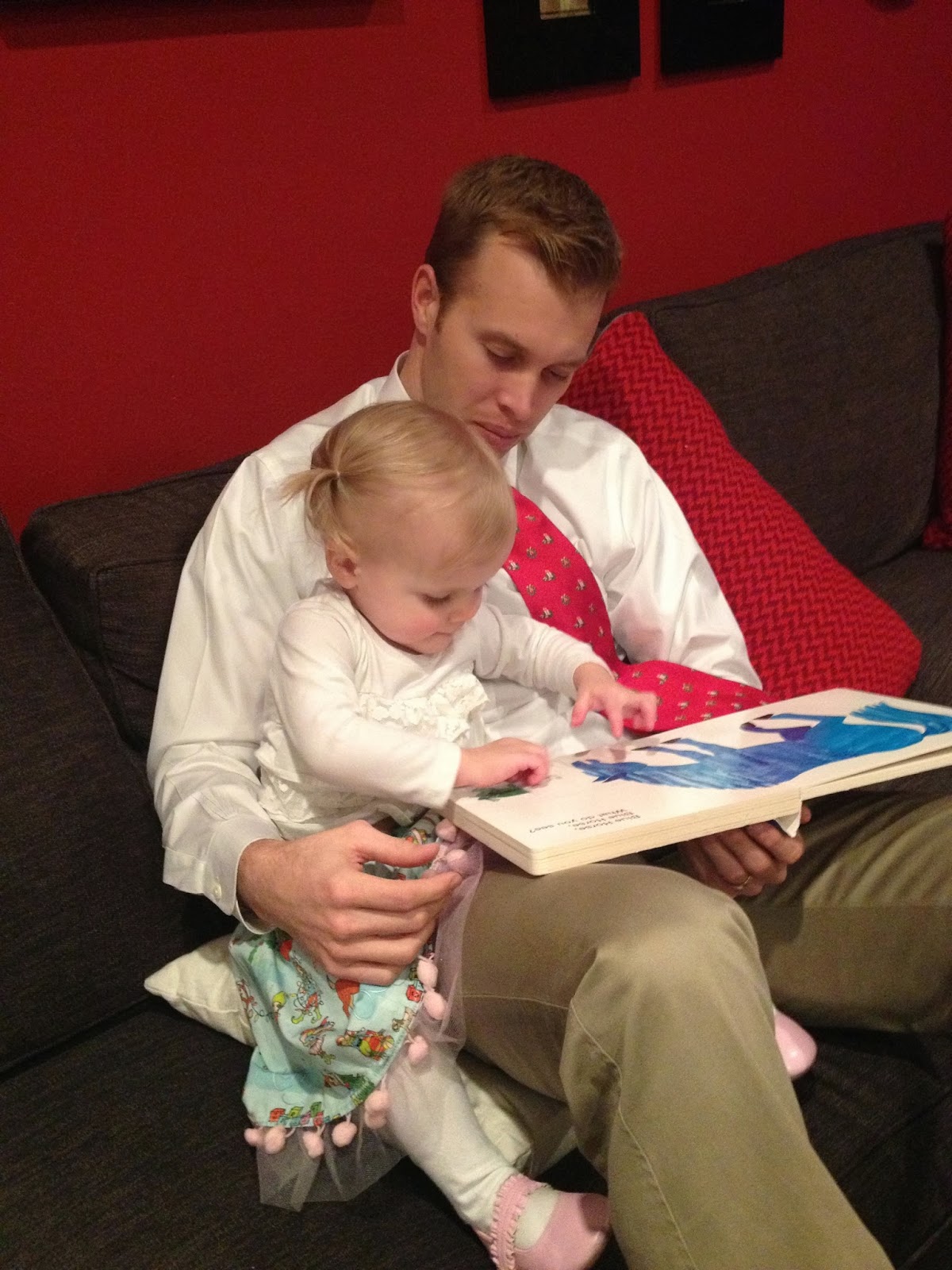 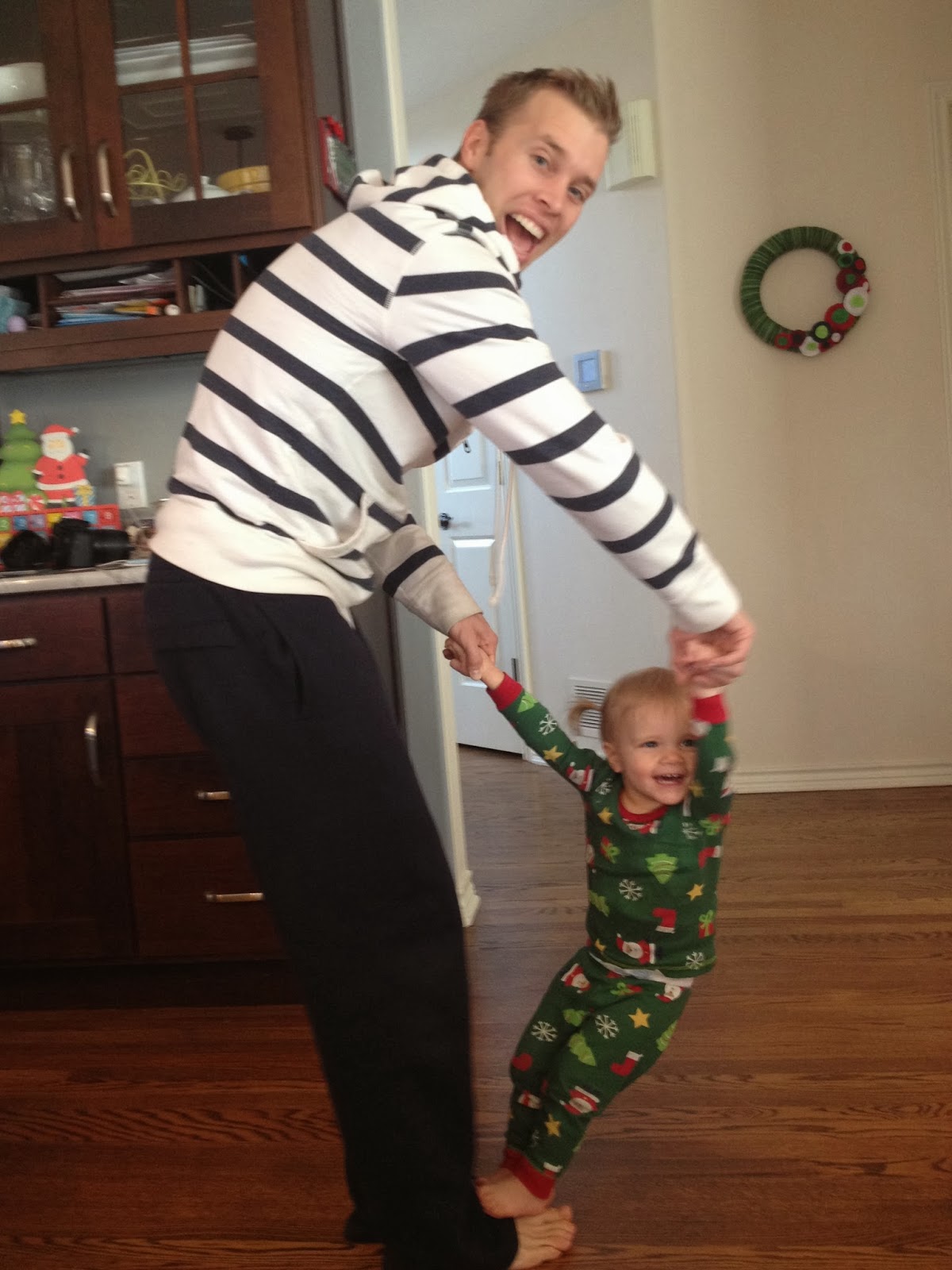 Another highlight of the trip was spending time with my grandparents.  I have written about them on this blog a lot, so you probably already know how much I adore them, but every time that I see them interacting with their great grandkids, I am reminded again how special they are.  How many 85 year olds are so interested in playing with little ones?  How many great grandmas get on the floor and play cars and snuggle with stuffed animals with the kids?  We are so blessed that they have been part of our kids' lives. 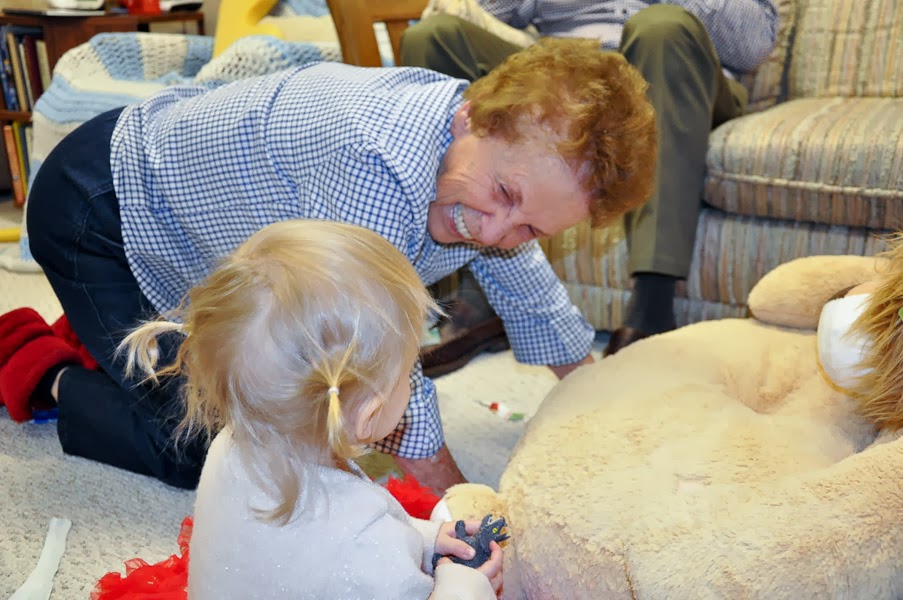 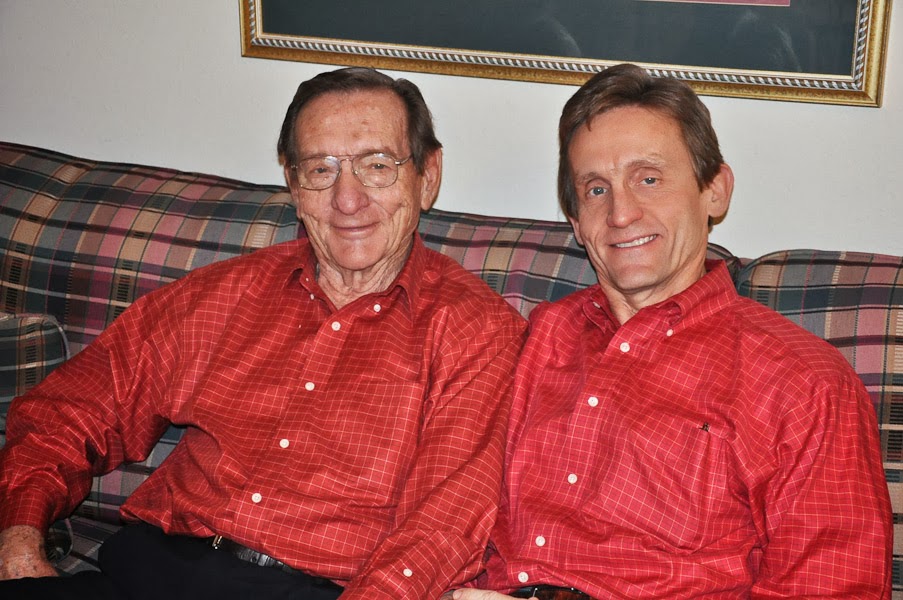 We had Christmas Eve dinner at their house, and Grampy and my dad showed up in the same shirt. :)  Classic.  Like father, like son.  After dinner, my grandpa read us the "Tommy Right and Left Story" which has been a tradition for decades.  He wraps candybars and reads a story which includes the words "right" and "left," and we pass the presents around in a circle until we each end up with one.  I love family traditions. 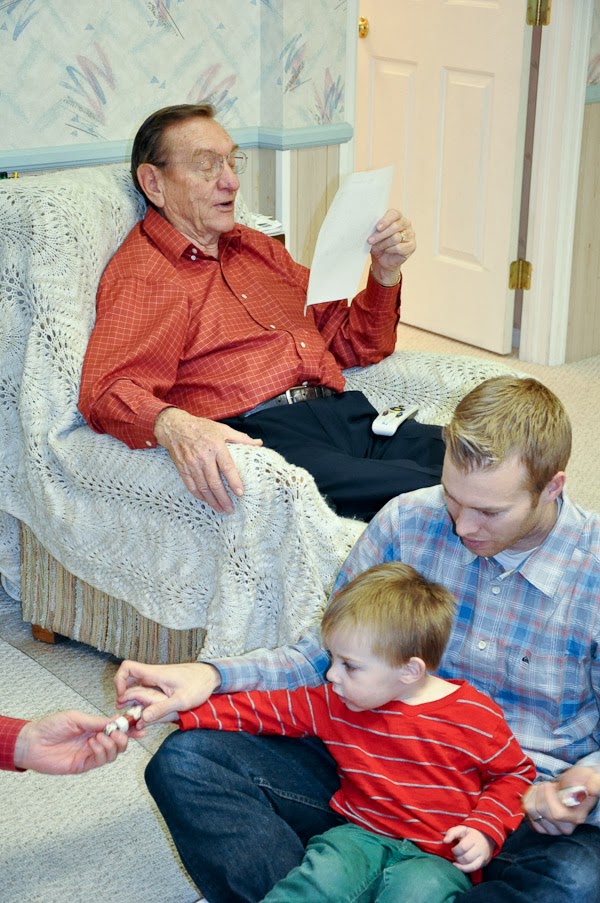 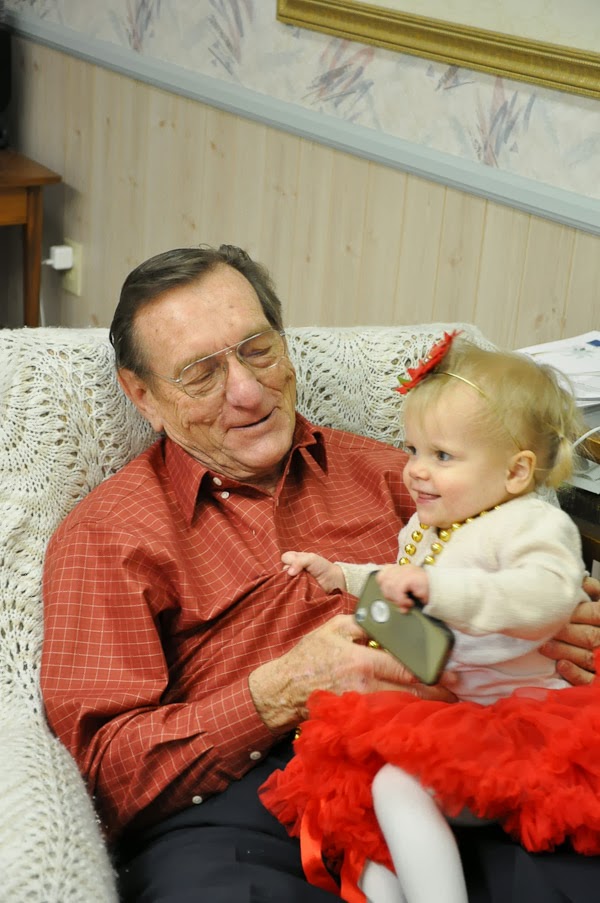 Christmas morning was pretty magical with the kiddos.  When my sisters and I were kids, we slept together in the same room (usually the same bed) and then woke our parents up in the wee hours of the morning on Christmas.  We stood at the top of our big staircase and waited for Dad to get the video camera and tape us running down together to see what Santa had brought.  We reenacted that tradition this year with our kids.  We didn't think they were quite old enough for a sleepover (we will definitely let the kids do that in a couple of years when we are together for Christmas again), but we did have them line up at the top of the stairs and run down cheering.  So fun! 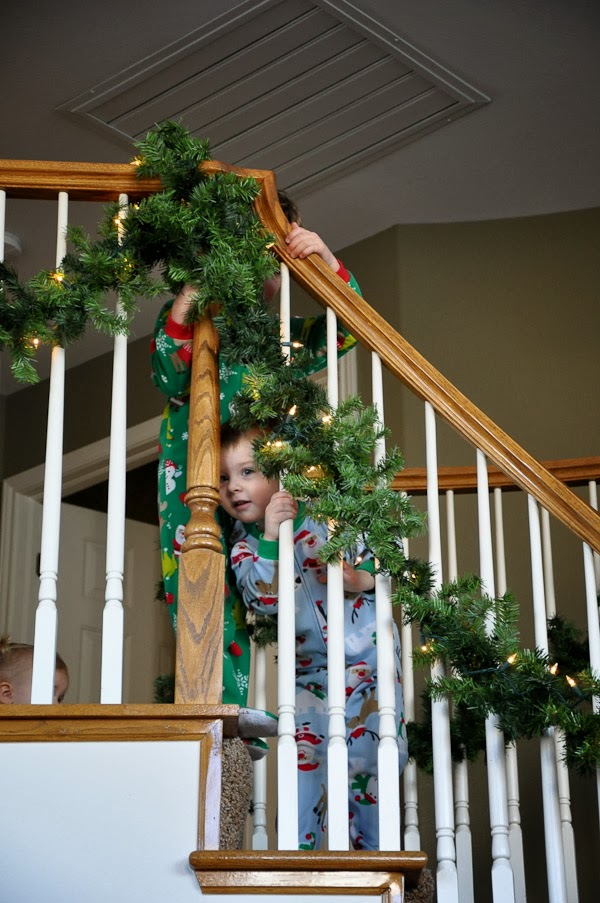 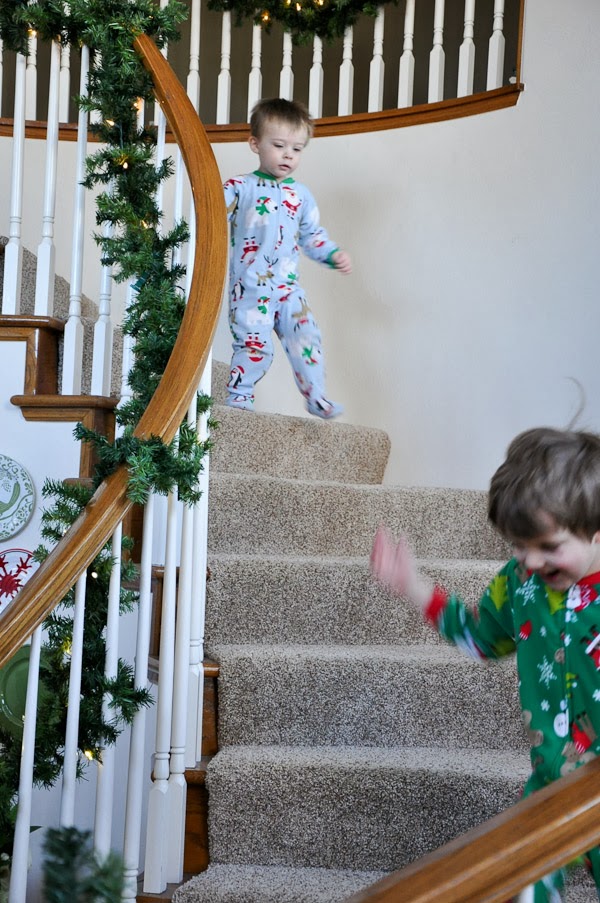 Santa (well, it was actually Bapa) brought Noah an electric Thomas the Train set.  He is in love. 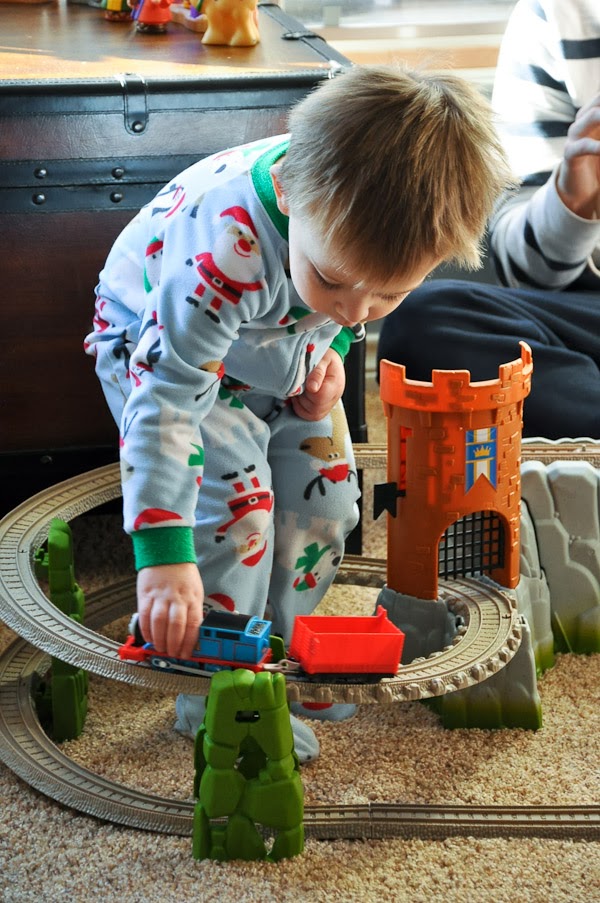 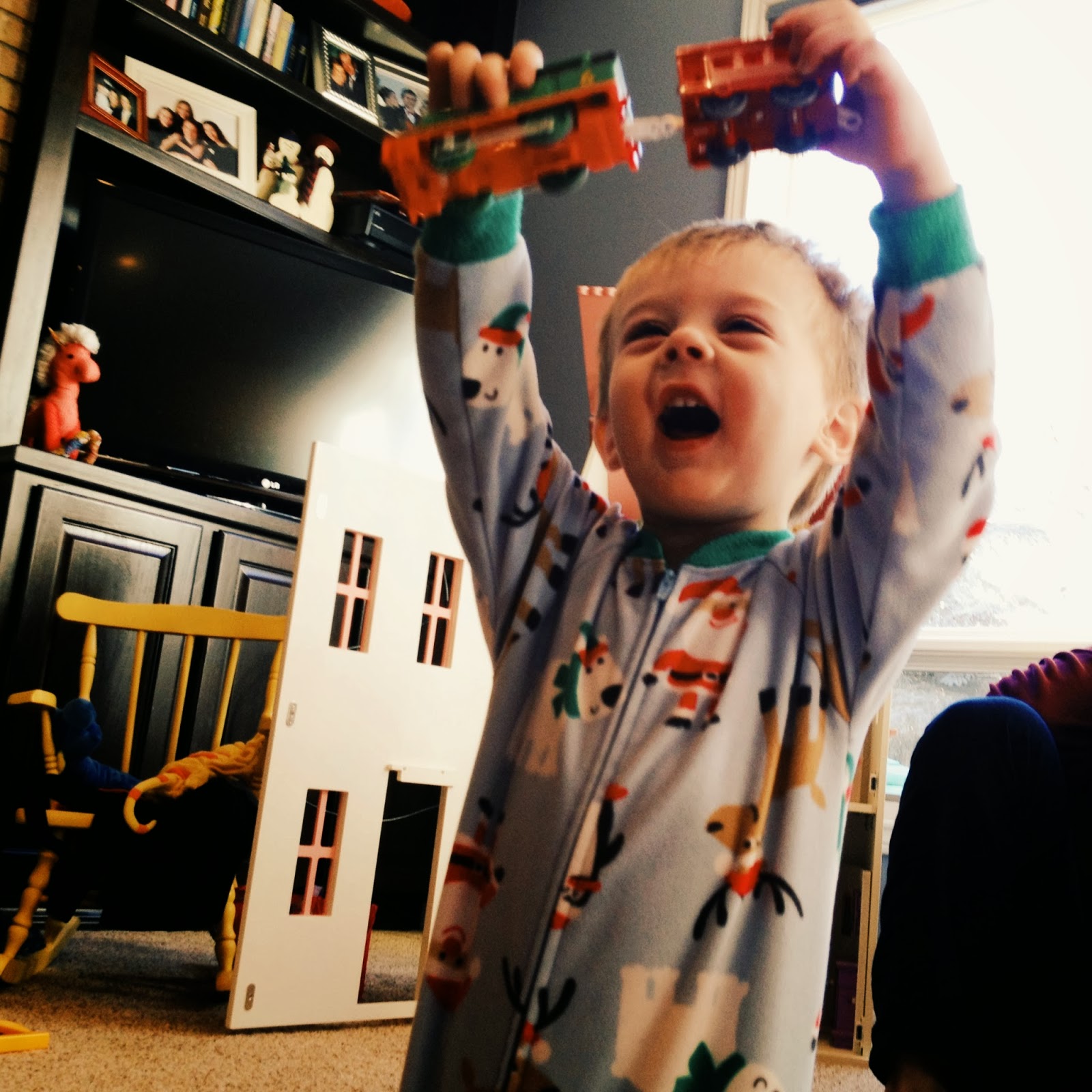 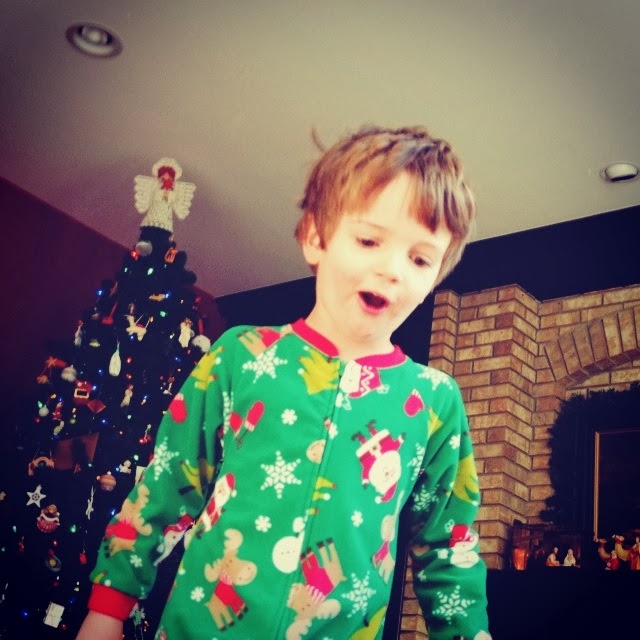 Callum was pretty impressed by Noah's train too.  :) I was amazed by how excited Cal was for Noah.  Before he even looked at his own gifts, he was rejoicing that Noah was so happy about his!  Sweet Callum...love him.

We miss living close to my family.  It was great to be with them for Christmas, but the visit just wasn't long enough (we had to cut it short so we could also go to San Diego to see Laura).  Can't wait to see them again, hopefully soon!
Posted by Rachel at 10:39 PM