The Latest on Noah

It's been several months since I've written an update about Mr. Noah, but I've been keeping notes in my phone and have compiled quite a list.  (Am I ever going to be able to keep this up when Baby #2 arrives??)  First of all, is he the cutest ever, or what??  My sister-in-law snapped some darling photos of him in his Christmas outfit, and I love them. 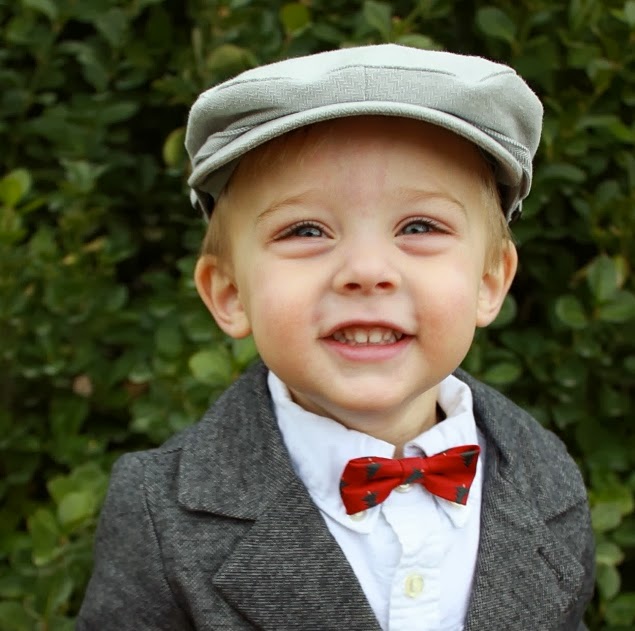 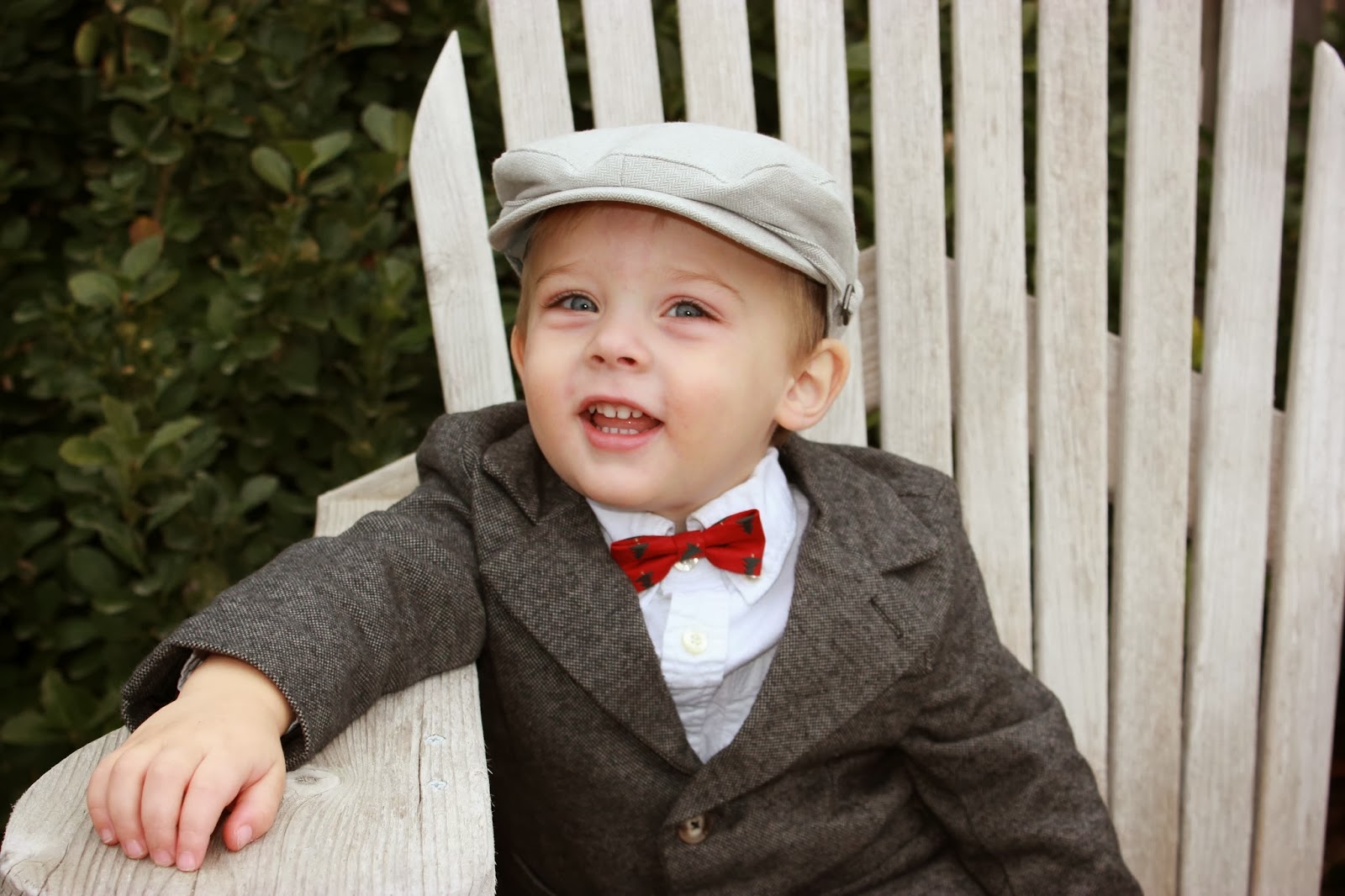 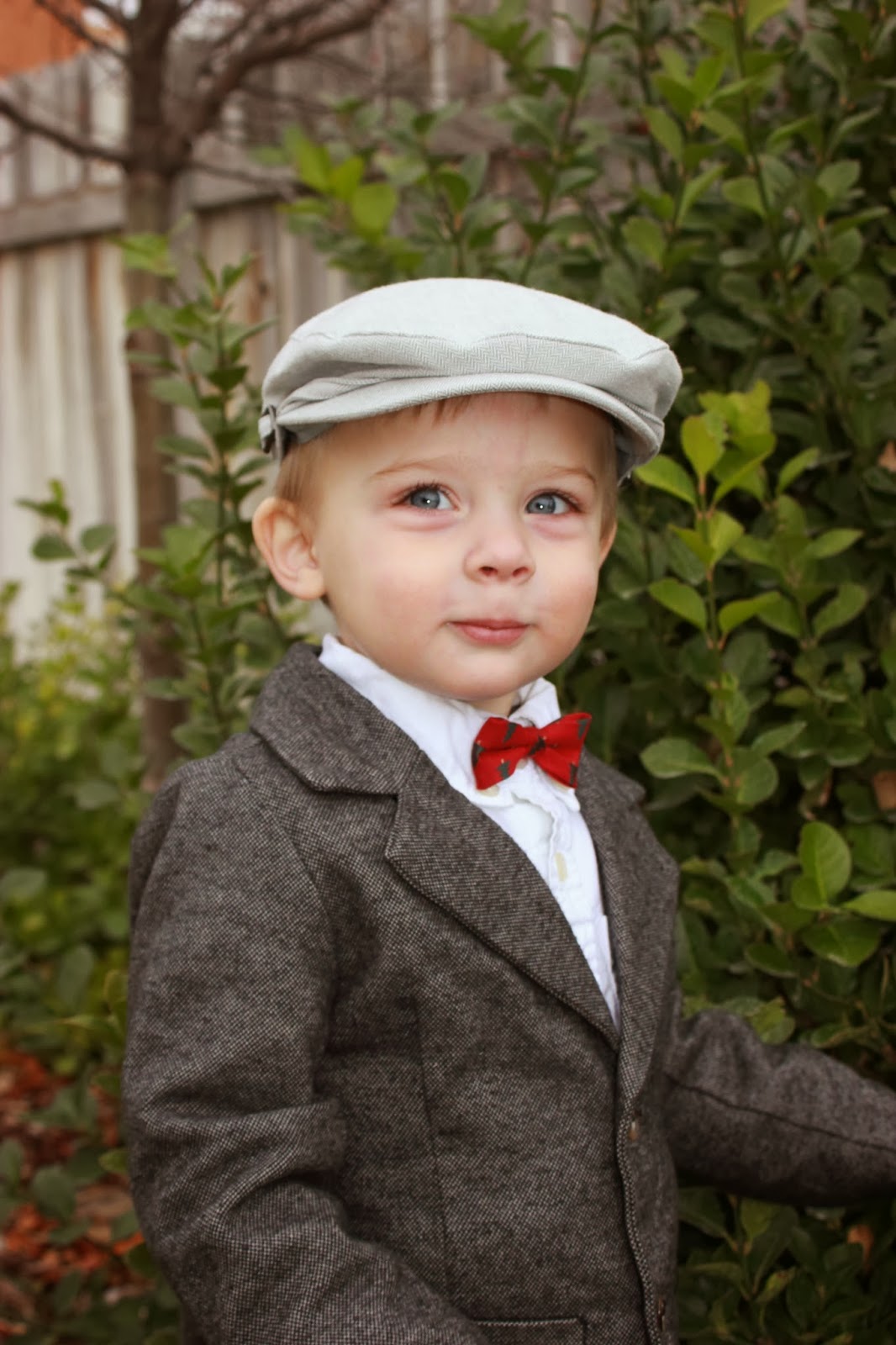 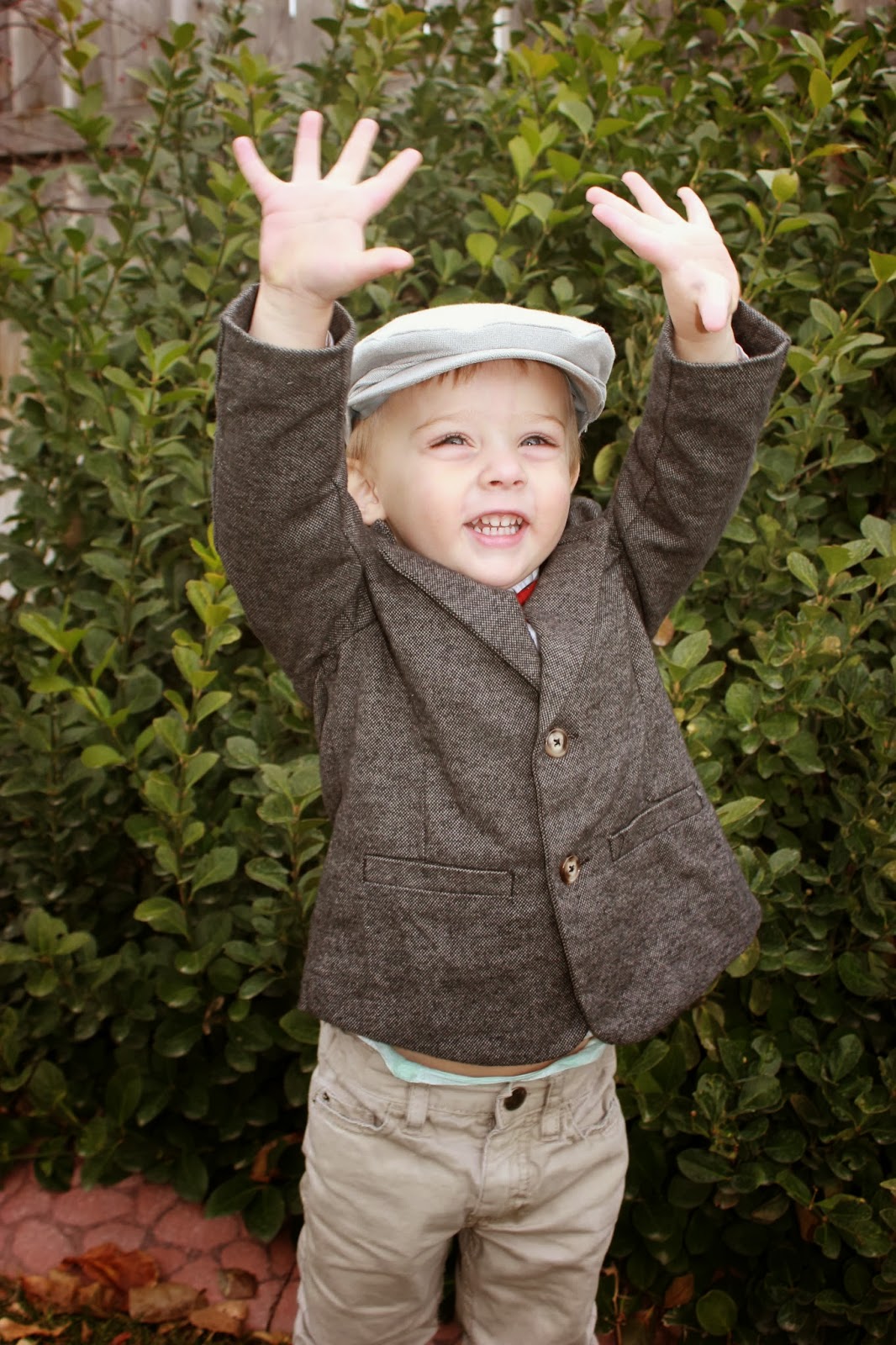 Here are some of the fun things Noah has been saying and doing lately (with some fun photos mixed in...some corresponding with the stories, some not):

A few months ago, my sister sent Noah a care package which included a little yellow VW bug.  He and Ryan named the car "Sherman," and Noah is in love with it. (As a side note, Ryan and Noah have a thing for alliterative names...Sherman the Slugbug, Daryl the Dog, Harvey the Heater, Vince the Vacuum...you get the idea.)  Now Noah spots VWs all over town and always shouts, "Look, Mom!  It's a Sherman!" Sometimes he even convinces me to stop so he can get his photo taken. :) I must admit, I notice VWs everywhere I go now...I've never realized how many people own them! 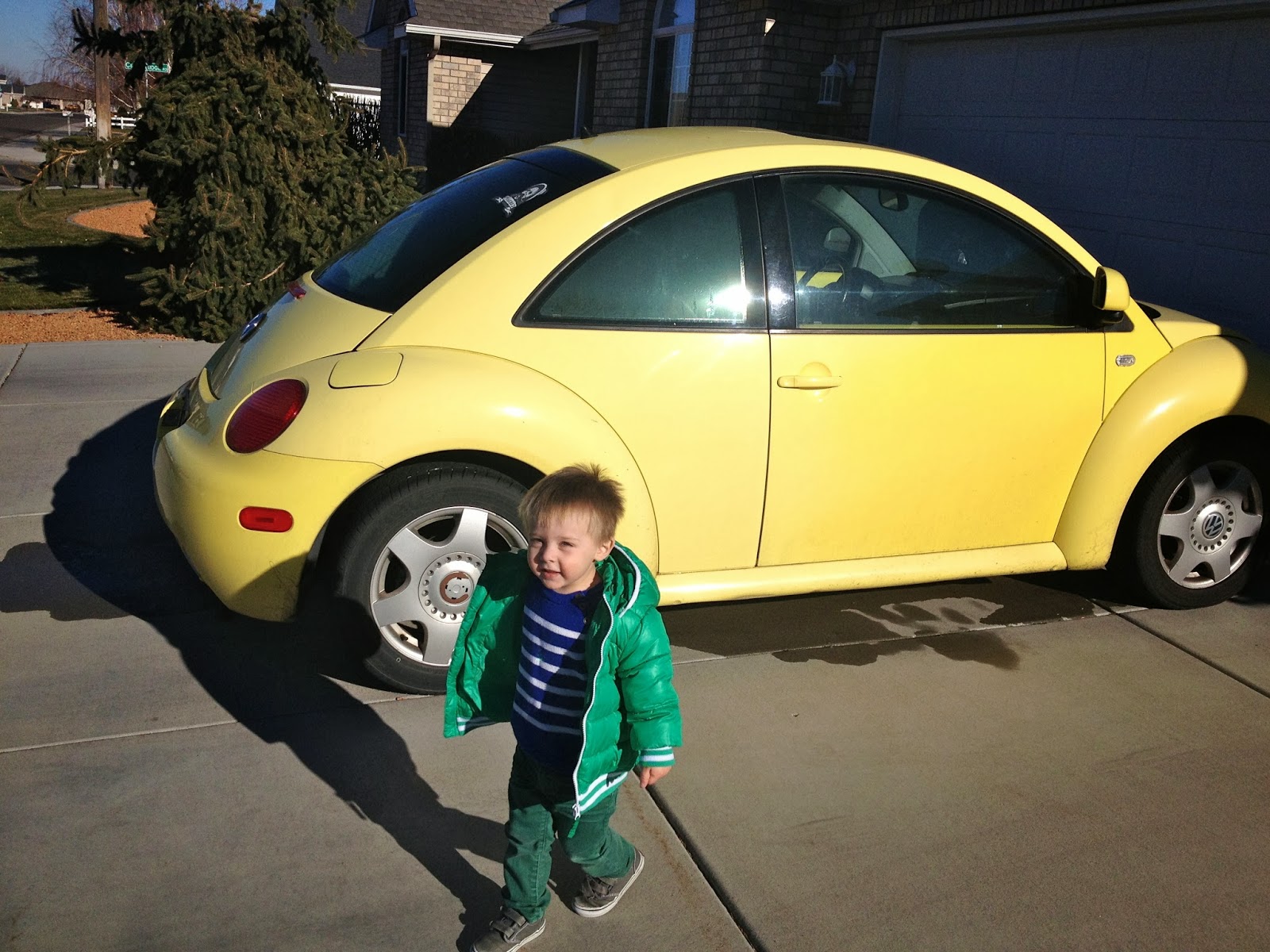 Noah has taken to big-time dawdling when we are putting him to bed.  After we tuck him in, he will often say, "Wait, Dad, I'm thinking about something!" And when we ask, "What?" he says, "Ummmm..." and comes up with something--anything--to try to delay bedtime.  Kind of infuriating but I can't deny that the kid is clever.

Noah's favorite plaything over the past few months has been a big box.  First, he and I made it into a car.  About a week later, he and Ryan turned it into a bus.  After the bus collapsed, he flipped it over and made it into a tunnel for his trains.  I remember doing similar things with my sisters as a kid.  And has anyone else read the children's book Kristina Katerina and the Box?  Pretty great. 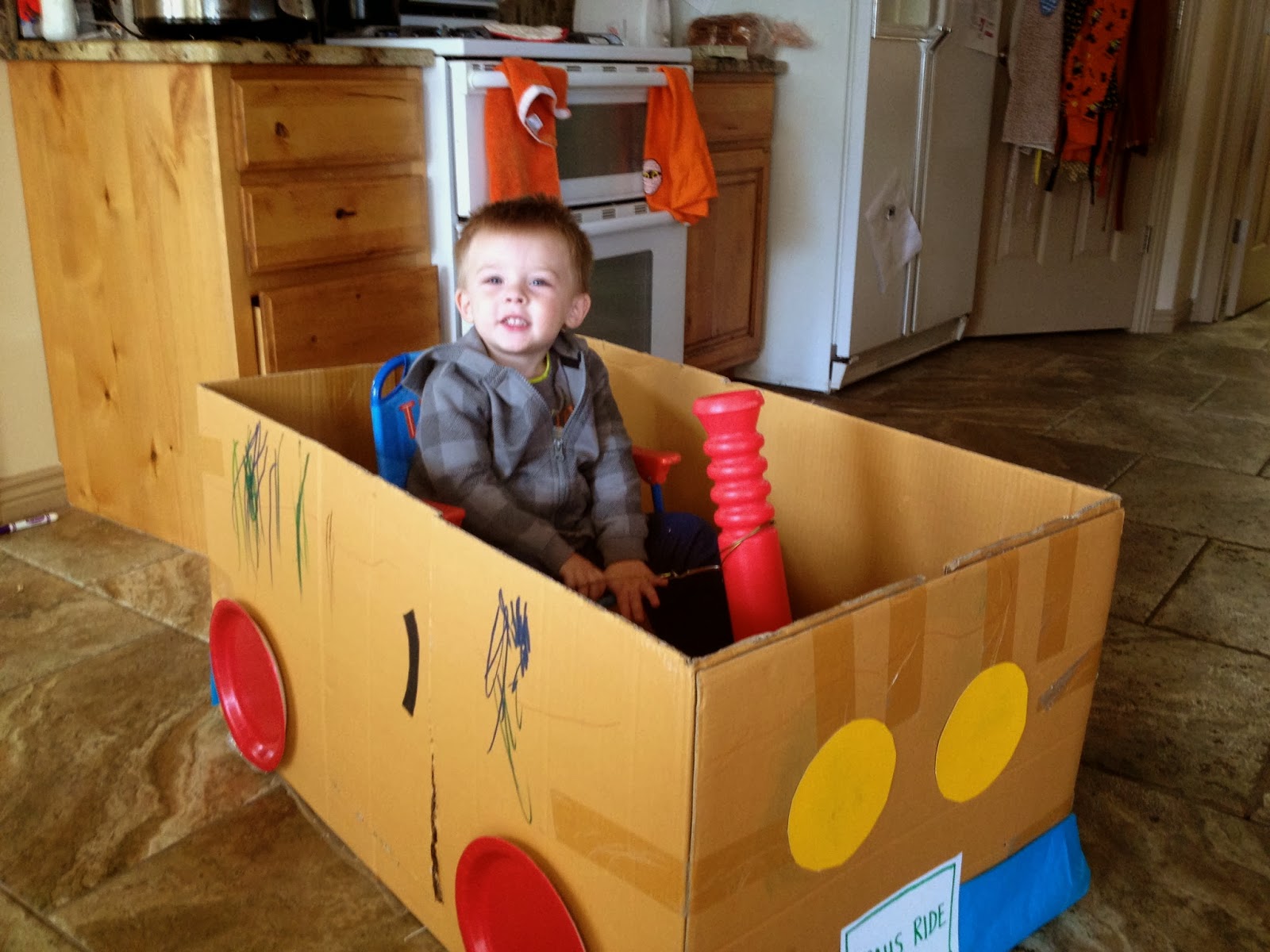 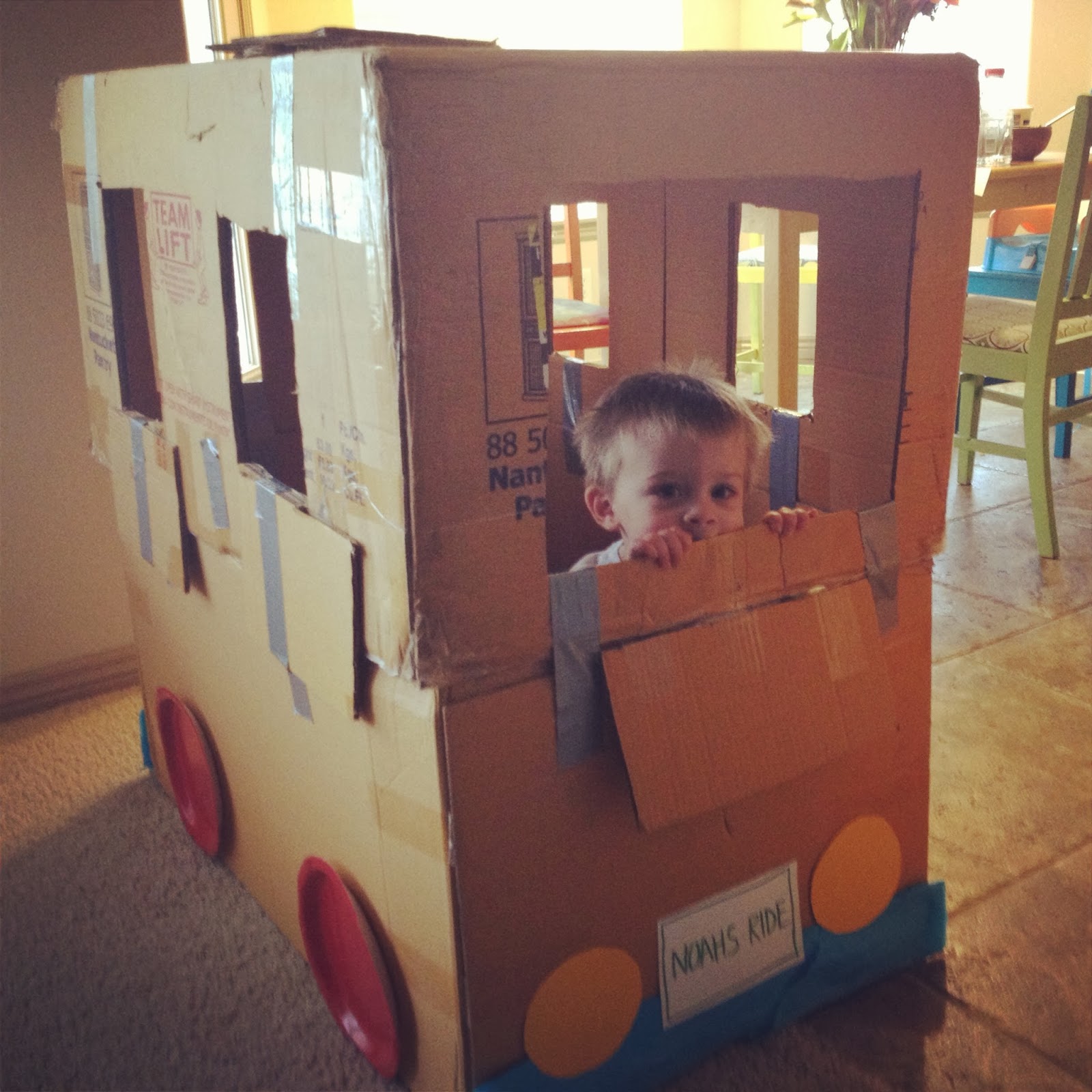 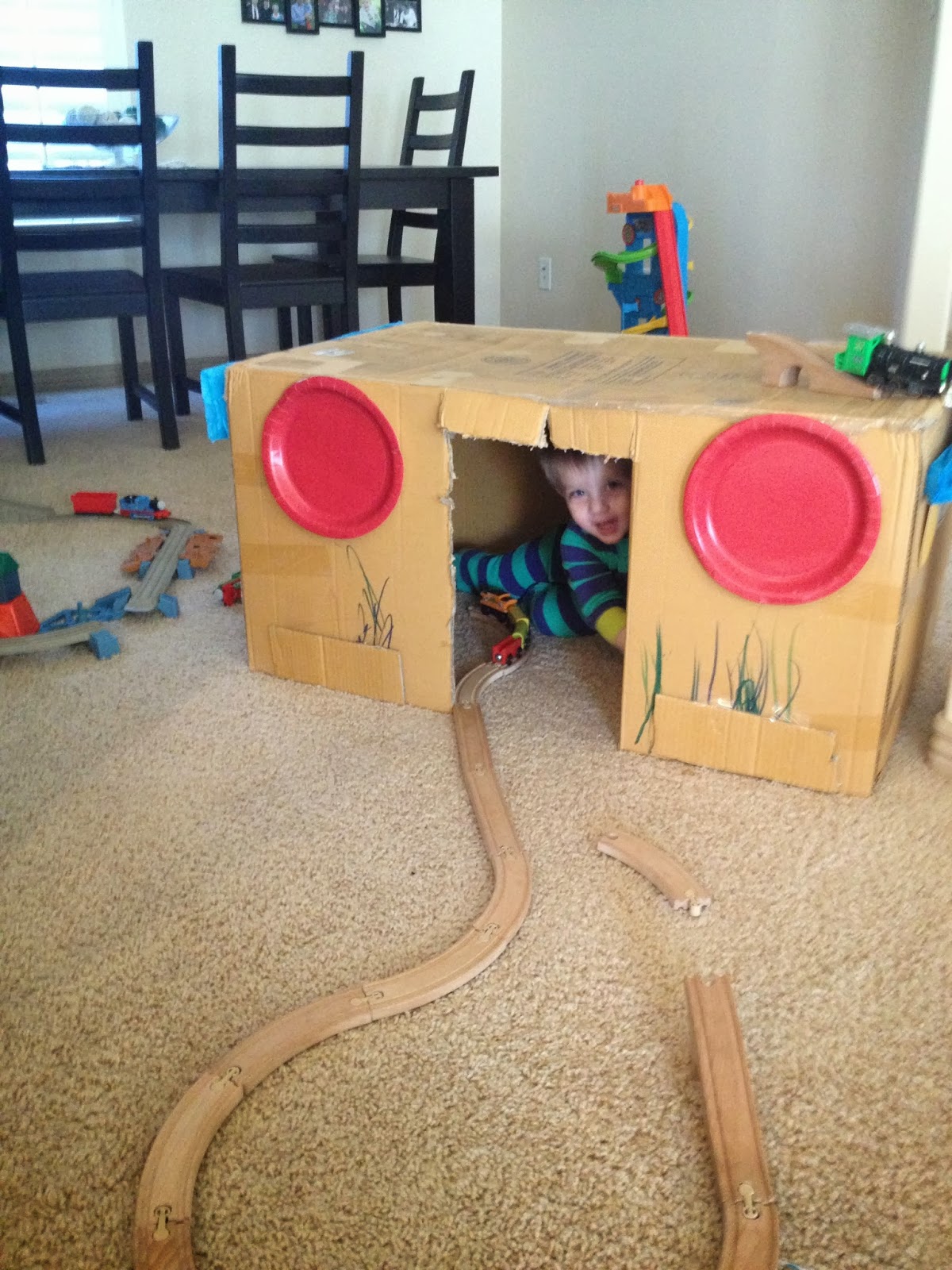 Noah recently picked up the phrase "my whole life" from somewhere.  I'm sure he doesn't really know what it means, but it makes me laugh whenever he says it.  The other day, he asked for a sandwich, and I told him he needed to wait a bit longer until lunchtime, and he said, "But Mom!  I've been waiting my whole life for a sandwich!!"  Hahaha. 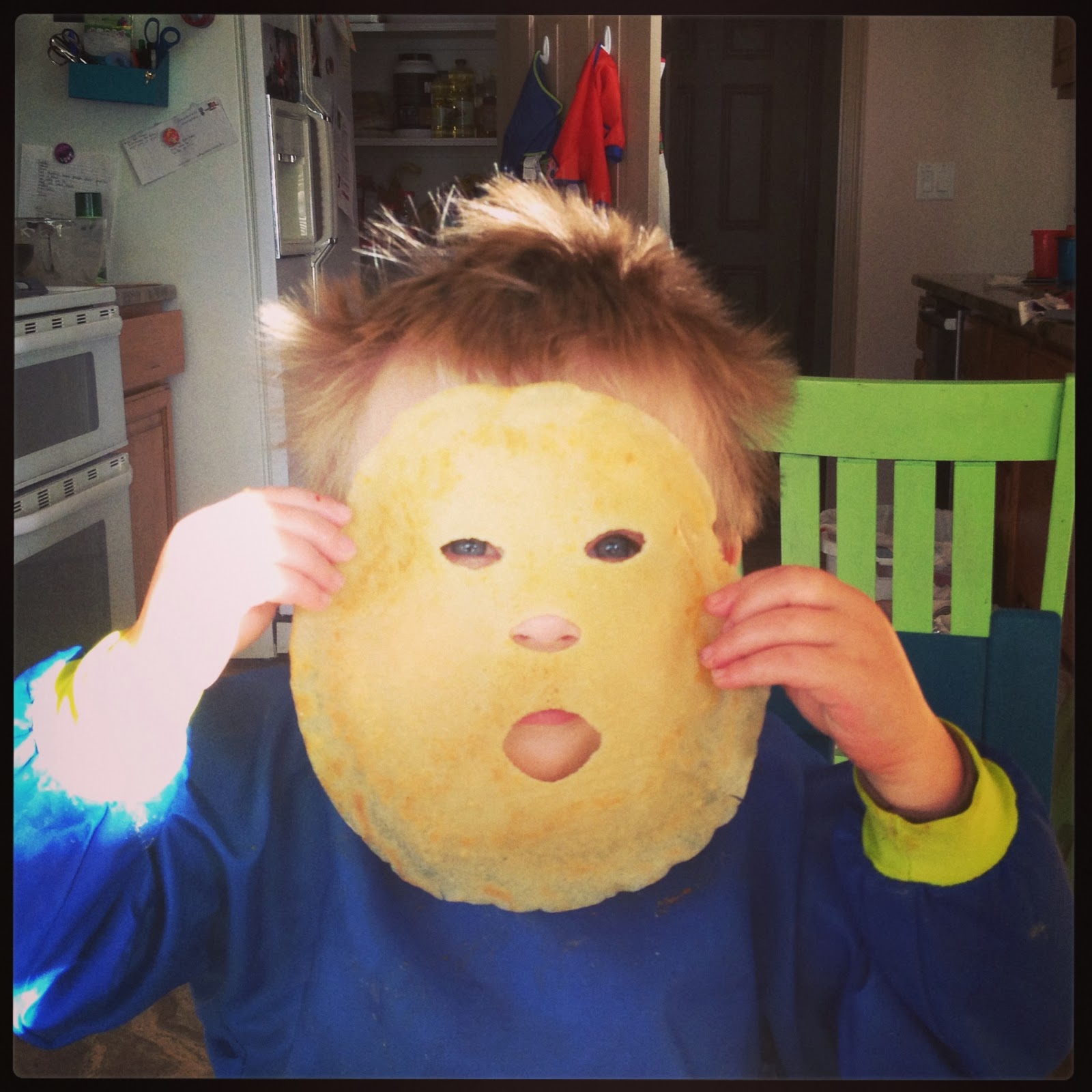 A few months ago, Noah started taking off his shoes and socks during church service.  He's never been a kid who strips off his socks at any opportunity, so I asked, a little confused, "What are you doing, Noah?"  He responded matter-of-factly, "Oh, just looking for toe-jam."  Well, whatever keeps you busy and quiet, kid!  (You can always count on the Nielsons to keep things classy!) 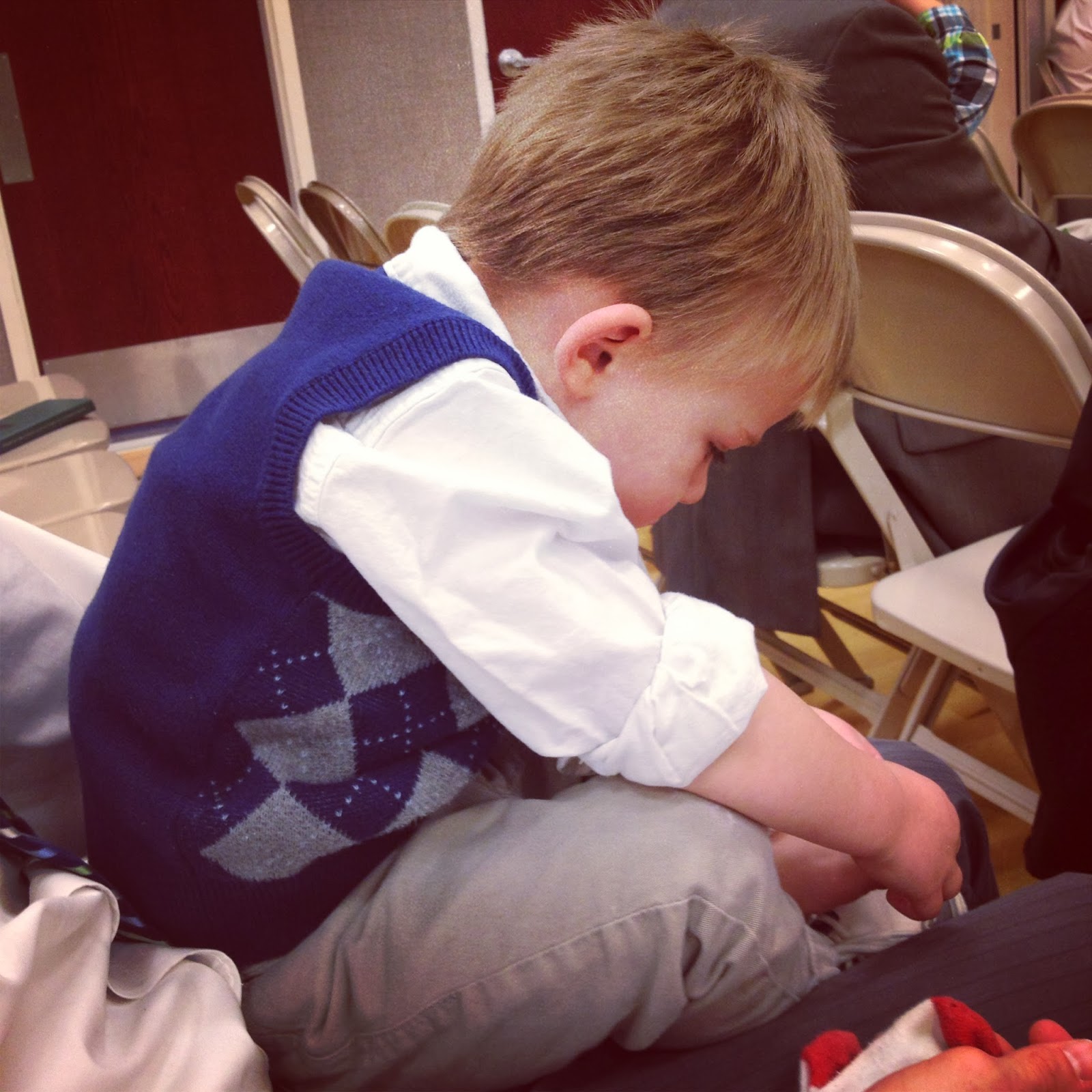 Noah has always been a bit of a tough sleeper, but this has improved since I got him a special clock about a year ago that turns green when it's "okay to wake."  It took some training and teaching to get him to respond to the clock, but he now sleeps until at least 7:00 a.m. because he knows it's not time to get up until the light turns green, and he doesn't freak out during naptime when he wakes up a little early because he knows the clock will turn green soon.  He used to always wake up screeching and hollering; now he wakes up and just plays a little, and then I will hear his cute voice over the monitor saying, "Mommy, Daddy!  The light turned green!"  So much more pleasant than a blood curdling shriek! 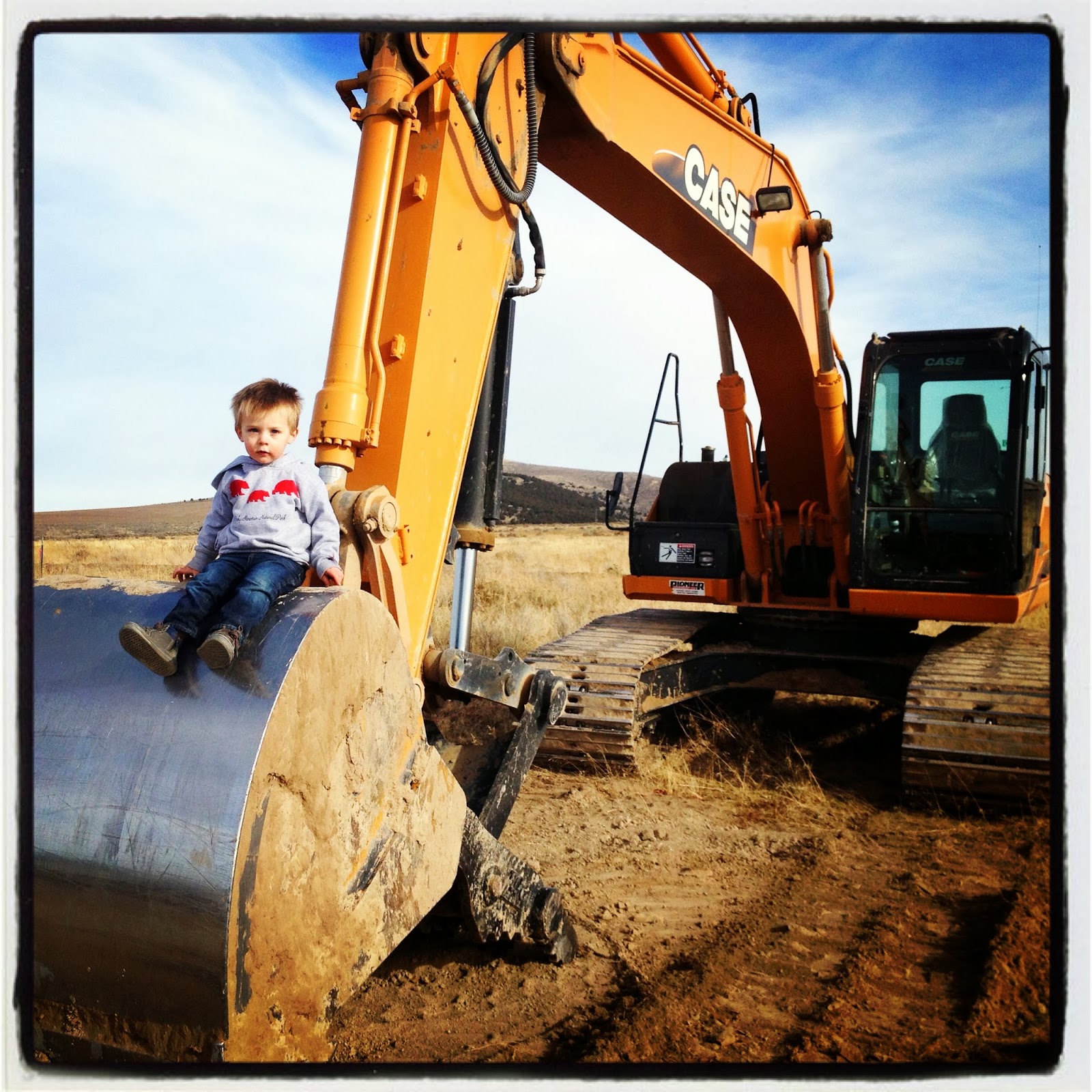 Speaking of waking up, Ryan usually gets him out of bed in the morning and lets him watch while he shaves and gets ready for work.  Noah loves this Daddy time, and I love that I get to sleep in a little later!  A few weeks ago, Noah decided he'd rather climb into bed with me, and I awoke to his little face inches from mine saying, "You are very special, Mommy.  You are very special."  He was patting my arm lovingly as he said it.  I about died. 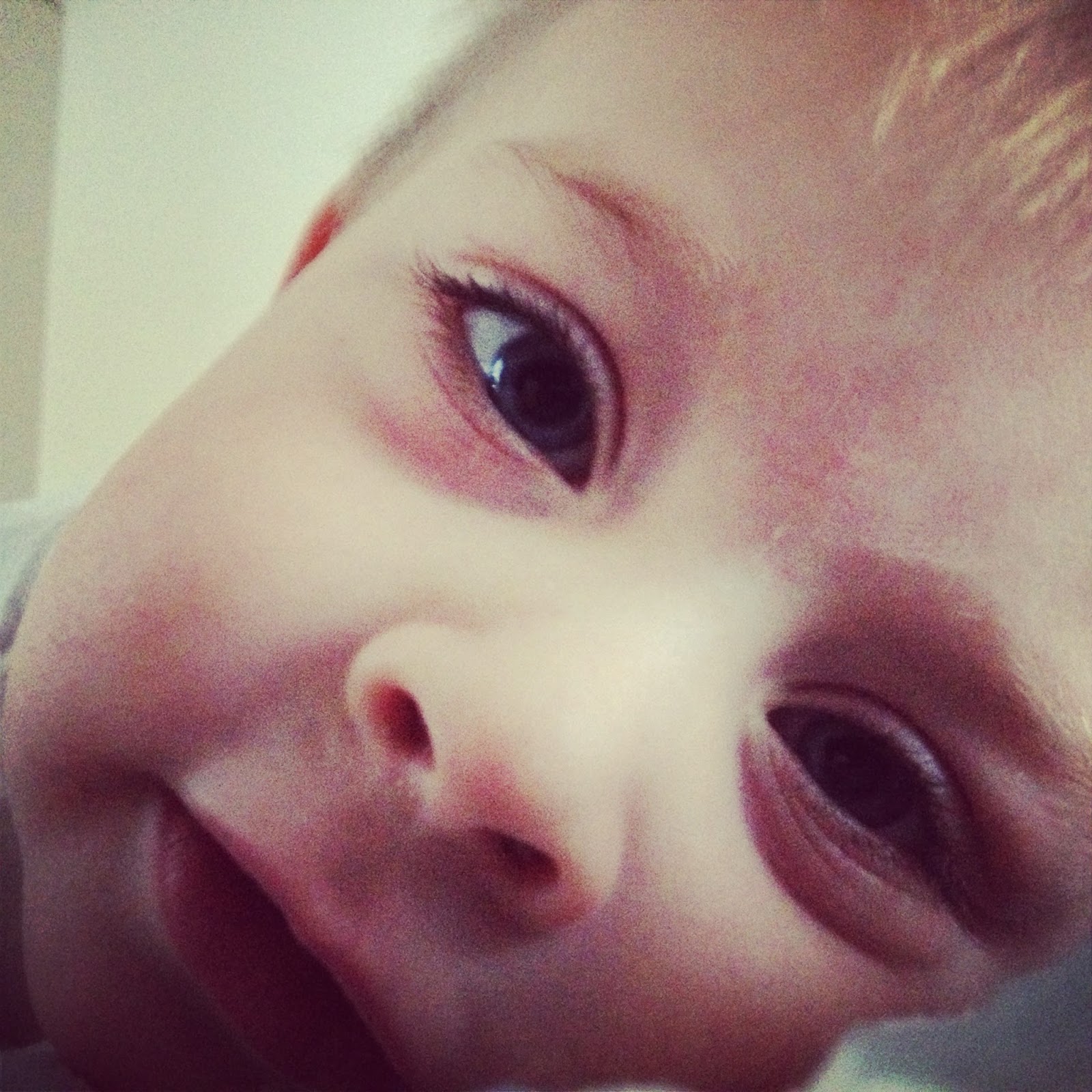 Noah hates it when Ryan leaves for work and often says, "Oh, Daddy, please don't go!  We'll eat you up we love you so!"  (Thank you, Where the Wild Things Are!)  When Ryan is home, Noah wants to know where he is at all times because he misses him during the day. 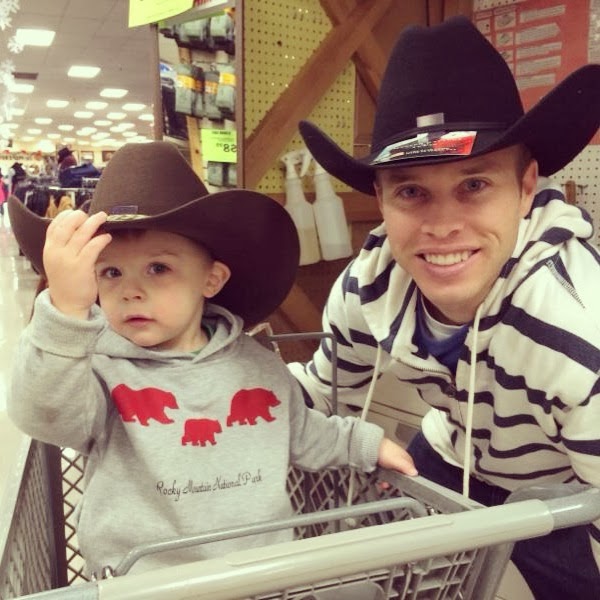 I love how he often sticks his finger in the air while he's talking to punctuate his point.  Cracks me up.  When we were visiting my family last month for Christmas, Noah came into the room where the adults were, stuck his finger in the air, and announced, "I just pushed Jade off the couch!"  He was so matter-of-fact about it that I couldn't help but burst out laughing.  I then made him go apologize to his cousin.

In spite of all of these cute stories, I must admit that life with Noah is not all fun and games.  He is a normal two-year-old and can be very stubborn and very whiny.  I'd say he has gotten much harder in the past two months, and I try every day to stay patient with tantrums, fits, and bossing.  This is a new habit of his: he tries to boss me and Ryan around and demand things.  He's been an only child too long and needs a sibling!  (Working on it!)  He is a very picky eater and also goes stark raving mad if his food isn't just the way he wants it (for example, if a little bit of jelly is squeezing out of his sandwich or the cracker that he is eating is slightly broken).  He has also taken to throwing himself on the floor and screaming, "BUT WHY?!?!?!" when he doesn't get his way.  I will admit, sometimes the kid drives me absolutely bonkers!!

Being a mom is hard work!  I sometimes question my mothering, vacillating between wondering if I am too tough with him or not tough enough. But at the end of the day, I am doing my best, and I love him, and that's really all I can expect of myself, right?