Back from the Buff

We are home, and Ryan is happy!  In fact, when he pulled up at the airport, he had this sign with him: 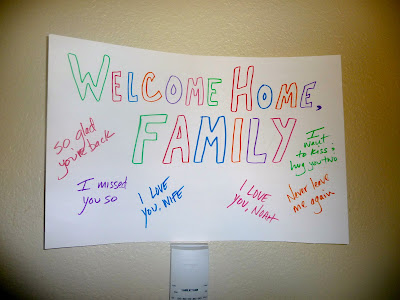 My favorite line on the sign is "Never leave me again."  It made me laugh.  We did keep in touch with Ryan as much as we could through the miracle of Skype.  It was amazing how Noah recognized him and responded to him, even over the computer! 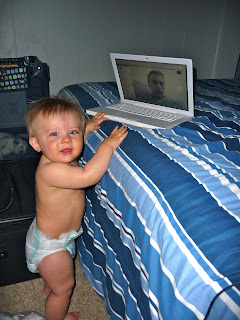 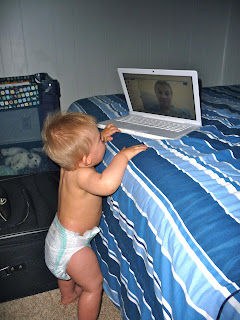 Noah and I had a great trip.  Our flights to and from the Buff were actually quite bearable because I was able to bring Noah's car seat on for two of the legs.  He is surprisingly calm when he's all nuzzled into his car seat.  When he's in my lap...well that's a different story.  He climbs all over me, grabs my glasses, dumps his snacks on the ground, arches his back and screams in protest when I try to hold him still...you know, typical active nine-month old behavior.  (Thank goodness I only had to hold him in my lap for two of our four flights.)  Despite how active he is, Noah is really fun to travel with because he is so friendly.  He smiles at everyone who makes eye contact with him, and I love hearing people goosh about how cute he is.  The kid is a real charmer.

We had the most wonderful week in Buffalo seeing old friends.  My "Buffalo Family" were the people who supported me during our years of infertility and adoption stress, so it was really fun for me to introduce them to Noah.  Some of them had met him in Utah when he was a tiny baby, but now he's so full of personality that it was almost like they were meeting him all over again.

We stayed with several different friends throughout the week, and I worried that Noah wouldn't do well with so much change and moving around, but he was a trooper and did just fine.  My only complaint was that he woke up at 5 a.m. every morning! (He's always been an early riser but 5 a.m. NY time is 3 a.m. CO time...what the heck??)  I think his favorite part of the trip was playing with my friends' kids.  They were so cute together.  Laney's kids, Henry and Milly, were quite obsessed with Noah.  When he was napping, Milly would wander all over the house saying, "Baby?  Noah?" I guess she's been asking for him ever since we left.  And Henry was so sweet with Noah--he wanted to feed him and hold him and snuggle with him.  He climbed into Noah's pack-n-play one day, and Milly soon followed. :) 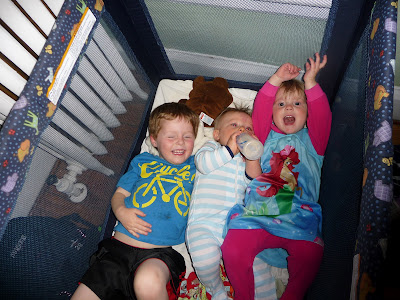 Natalie's son Taylor was also very excited about Noah and would make airplane noises as he fed him baby food (until he would say the food just smelled "too gross" and he couldn't take it anymore--hilarious).  I remember when Taylor was a newborn baby ("Mr. Flops," as I called him), and he would sleep in my arms while I graded papers.  I have watched this little boy grow up, and it's so fun to see him with my little boy.  I think they look like they could be brothers! 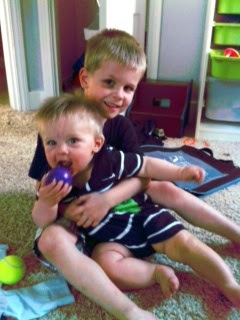 I also saw several of my beloved colleagues from the high school.  They really are beloved, and I miss them so much.  It was a privilege to work for four years with people who became some of my favorite friends in the world--it made going to work every day fun.


Now that I am back home, I am trying to process how the trip made me feel.  It made me so happy to spend time with such kindred spirits, but it also made me a little sad because I am no longer near all of those people whom I love so much.  When I saw my old friends, it felt like I had never left.  But I have left, and that's just kind of a weird realization.  I miss having friends that are so close that we can go for coffee/steamed milk and talk for hours about all of the serious things of life.  I miss having friends that are so close that I can sleepover at their houses and feel 100% comfortable stumbling out of my room in the morning, still in my PJs with my hair a mess and my teeth unbrushed, to sit down with the family around the breakfast table.  It takes time to build friendships like these, and it's hard to move on to a new chapter, as good as that new chapter might be.

All in all, I'm just grateful.  I'm grateful to have friendships like these.  I'm grateful that distance and time doesn't change friendships like these.  I'm grateful that God gave us four wonderful years in Buffalo, New York and that He is granting us a new adventure now.  I am grateful to know that He wants us to have kindred spirits wherever we live, and He has already guided me to some wonderful friends here in Colorado.  I am grateful that He brought us close to family right before Noah was born because, as a friend in Buffalo told me right before I moved, "No one loves your babies as much as your family."  God is good, and life is good.

And on an unrelated note--it's Mothers' Day week!  I have a lot of thoughts on motherhood, so hopefully I can do a few mother-related posts this week (as soon as I get unpacked and get my life back in order--we've been home since Saturday night, and I still have stuff in suitcases and laundry to be done).