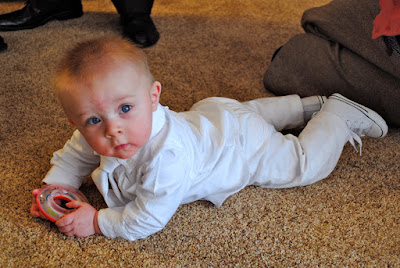 Sunday February 12th was the last day of the Noah Extravaganza. :)  He was given a name and a blessing in church.

Since I gave a Mormon lesson in the last post, I might as well give another one now.  I hope no one minds.  I feel a little vulnerable doing this because my religious beliefs are very close to my heart and are easily distorted and often mocked; but I know a lot of people are genuinely curious about Mormon beliefs, especially in recent years due to all of the media attention we’ve been getting.  Please know that I am not preaching—just explaining.
In the Mormon faith, we do not baptize babies because we don’t believe that they have the ability to sin, nor do we believe that they are born sinful due to Adam’s transgression.  We believe that until children are eight years old, they are still learning right from wrong and cannot be held spiritually accountable for their actions.  Children may choose to be baptized when they are eight years old, after they have learned about Jesus, repentance, and God’s commandments.
Though we do not have a baptismal service in church for babies, we do have an ordinance where fathers are able to bless their babies, formally declare their name, and give them counsel for their lives.  If a baby does not have a father in his life, he can be blessed by his grandfather or by a trusted family friend. Most of the time, babies are blessed in the first few months of their lives, but Noah's adoption had to be finalized before we could bless him.
We believe that men who diligently live God’s commandments qualify for His priesthood or the ability to act, serve, and bless in His name.  This isn’t reserved for priests or pastors, but any righteous man can be ordained to use the priesthood in his own home and to bless the lives of others.  Some people criticize the Mormon Church because it is only men who hold the priesthood.  Though this might seem “sexist,” I truly don’t feel it is…and I consider myself to be somewhat of a feminist.  I think it is okay that men and women have different roles in life and in religion.  Women are leaders in our church too, and they are still able to bless others’ lives through God’s power.  Gordon B. Hinckley, who was the president of our church from 1995 to 2008, said, “The men hold the priesthood, yes--but my wife is my companion, and in this Church the man neither walks ahead of his wife nor behind his wife but at her side. They are co-equals in this life in a great enterprise.” My parents modeled this kind of partnership in my home growing up, and it is the kind of partnership that Ryan and I strive to develop every day.
Ryan did a beautiful job blessing Noah.  He told him that the miraculous circumstances surrounding his birth had strengthened the faith of many people and that he will always be able to think of the selfless sacrifice of his birth parents as an example of Christ’s Atonement.  He blessed him with health, happiness, and understanding.  He told him that we love his energy and enthusiasm.  He encouraged him to learn from his mother how to serve others (yeah, this was basically the sweetest thing ever--made me feel so good).  He blessed him to feel his Heavenly Father's love and to remain close to Him throughout his life.
Noah was an angel throughout the entire blessing.  I was afraid he would be fussy, but he was silent and content.  He was surrounded by all of the men in his life who love him so much—his uncles, his grandpas, his birth grandpa, and his great grandpa.  It’s a symbolic aspect of the blessing that the baby be encircled by those men who will support him, protect him, and mentor him throughout his life.  Such a beautiful sight.
After church, we all went to my dad’s house for a family lunch.  We ate all of my dad’s specialties--tortilla soup, cornbread, and Christmas salad.  Yummmm.
A quick word about my dad.  He is amazing.  As I watched him bustling around the kitchen in his apron (yes, he has an apron—though, in his defense, it is a manly one), I couldn’t help but think about how remarkable he is.  He has been a widower for nine years, and he has never let that stop him from hosting family events.  He did so much to make sure that Noah’s weekend was perfect for all of the visiting company.  He grocery shopped and cooked and cleaned for everyone...and it was a big crowd. He really is Super Dad, and I am so grateful for him.
It was such a fun afternoon with the family before everyone headed home:
I tried to get a picture of Noah with everyone, but he was so tired by this point in the weekend that it didn't happen.  Poor baby was done with photos, and who can blame him?...
Fortunately, we got him out of his stiff clothes and Grandpa cheered him right up! 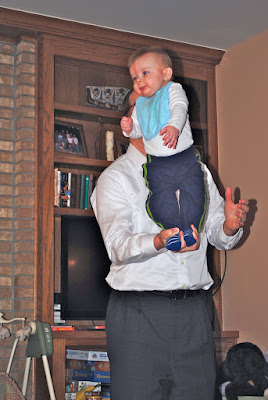 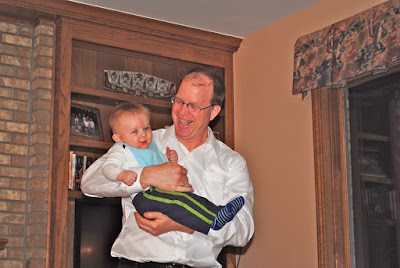 What a weekend!  We are so grateful for all of the people who came to support Noah.  He is such a blessing in our lives.
And now, I am going to go kiss him in his sleep...my sweet sweet boy.
Posted by Rachel at 12:33 AM

Lover of conversations with a kindred, homemade chocolate chip cookies, and Idaho sunsets
Who feels overwhelmingly happy when nibbling on one of her delicious children
Who needs daily quiet time to think
Who fears losing someone else whom she loves

Who gives care packages to her friends and love letters to her kids and Ryan
Who would like to see more openness, compassion, and individuality in the world
Resident of a little house with cute daisy bushes in front